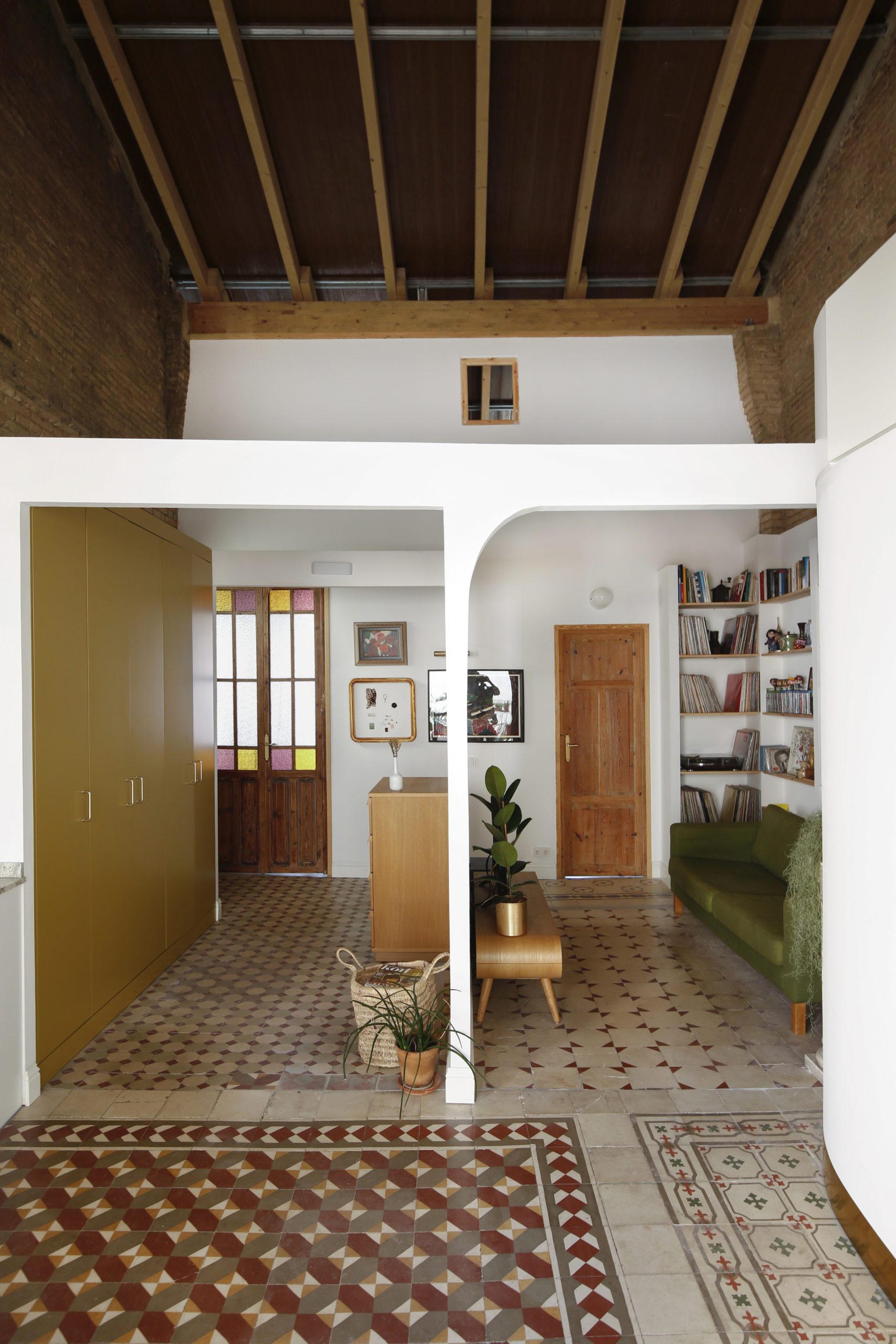 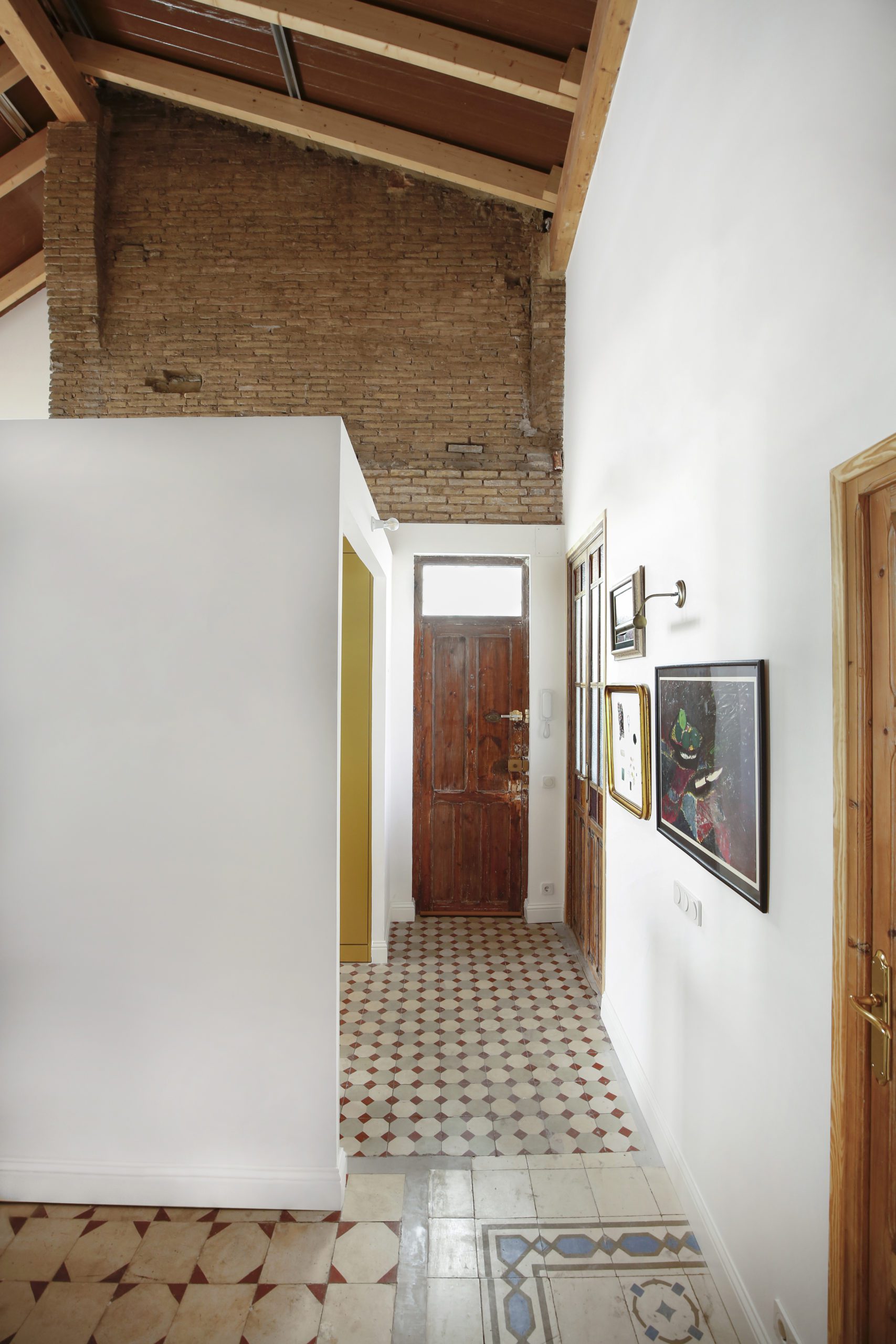 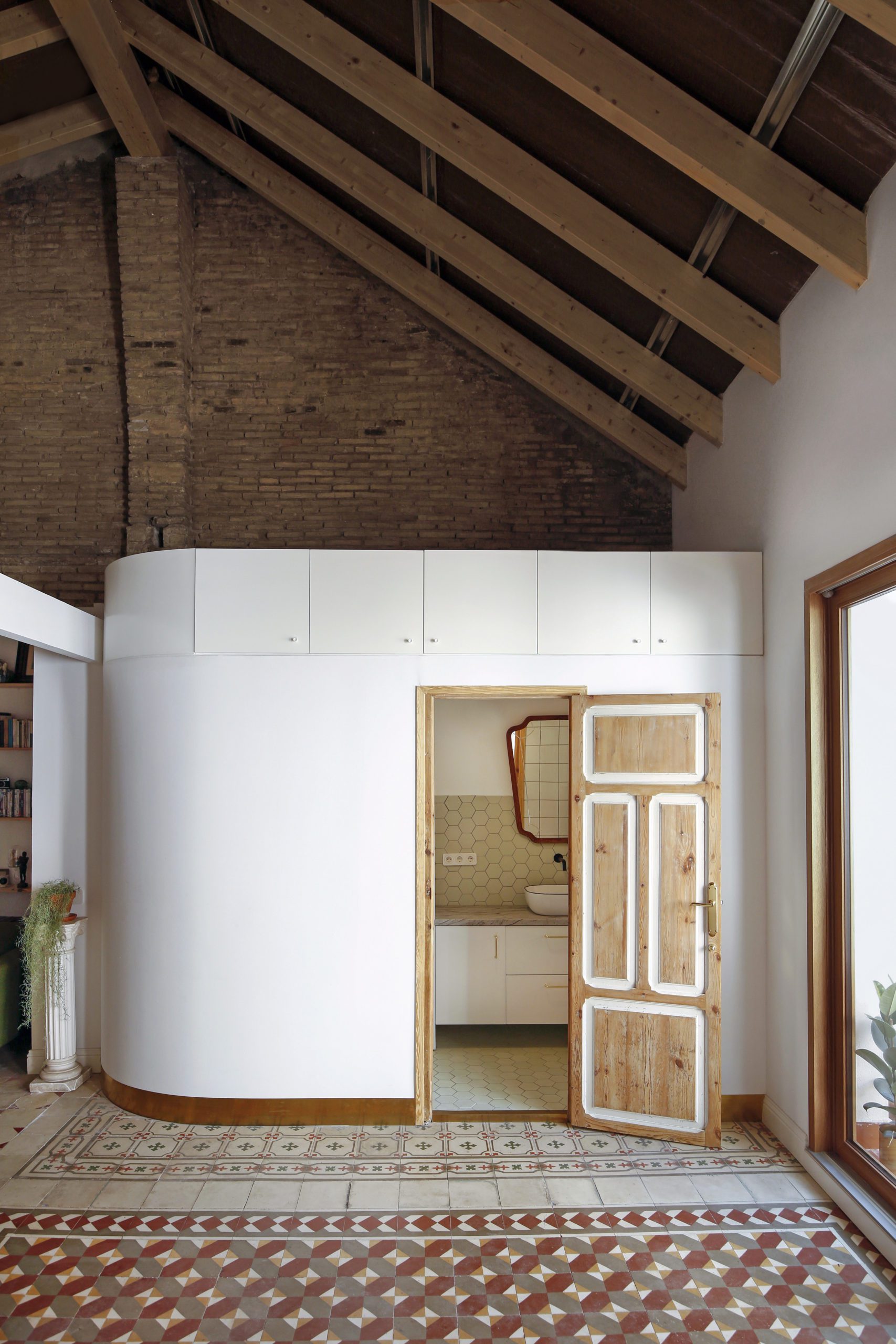 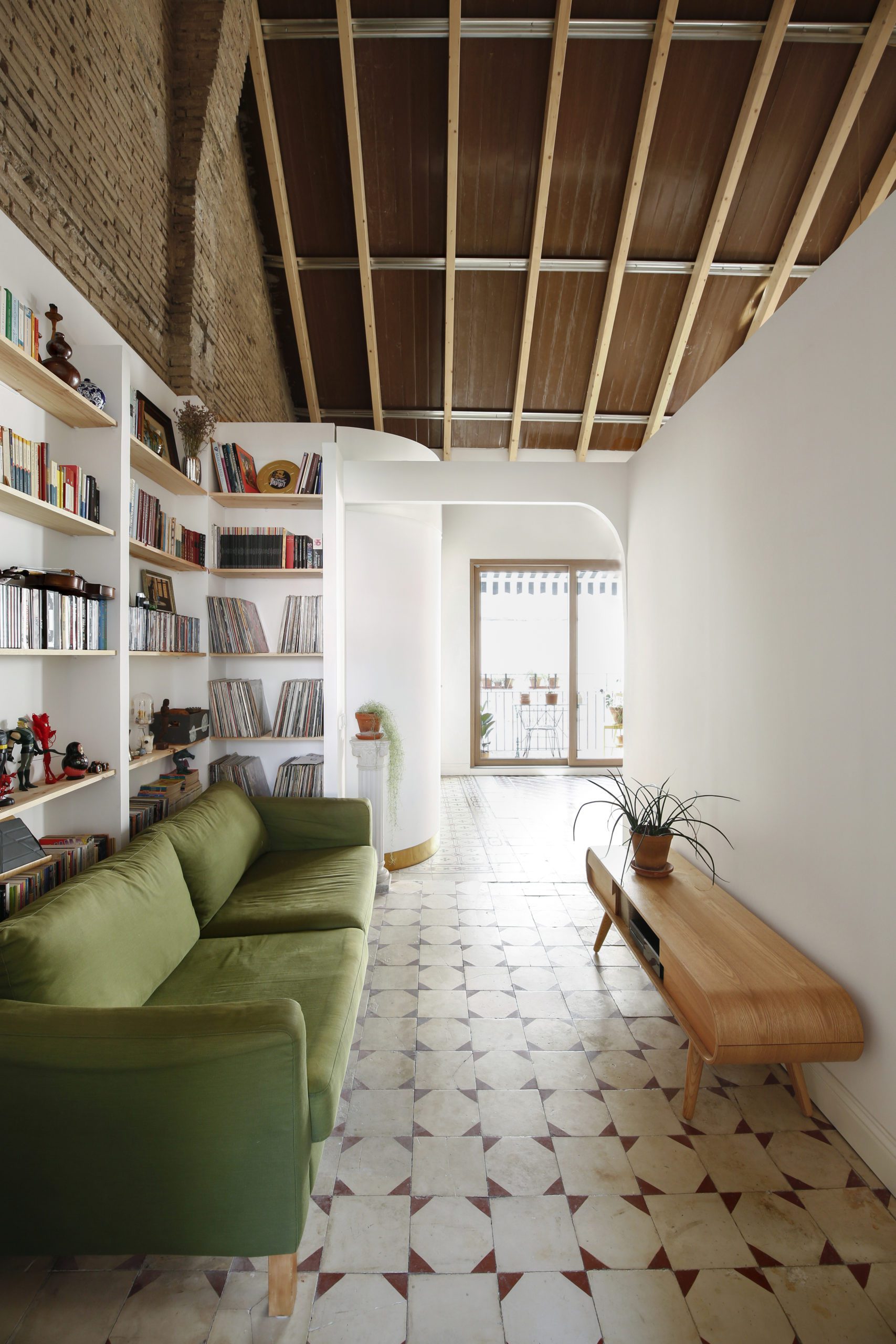 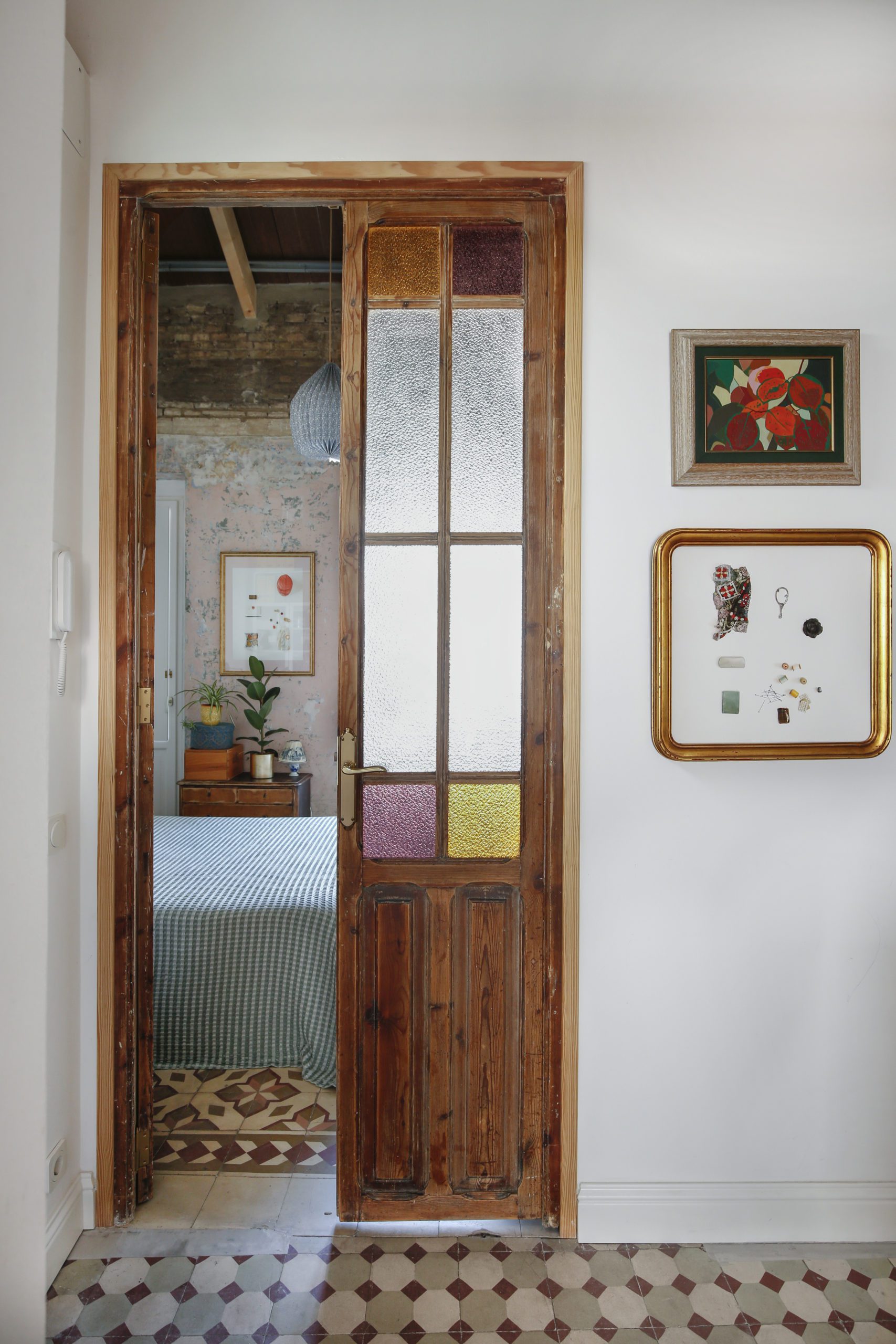 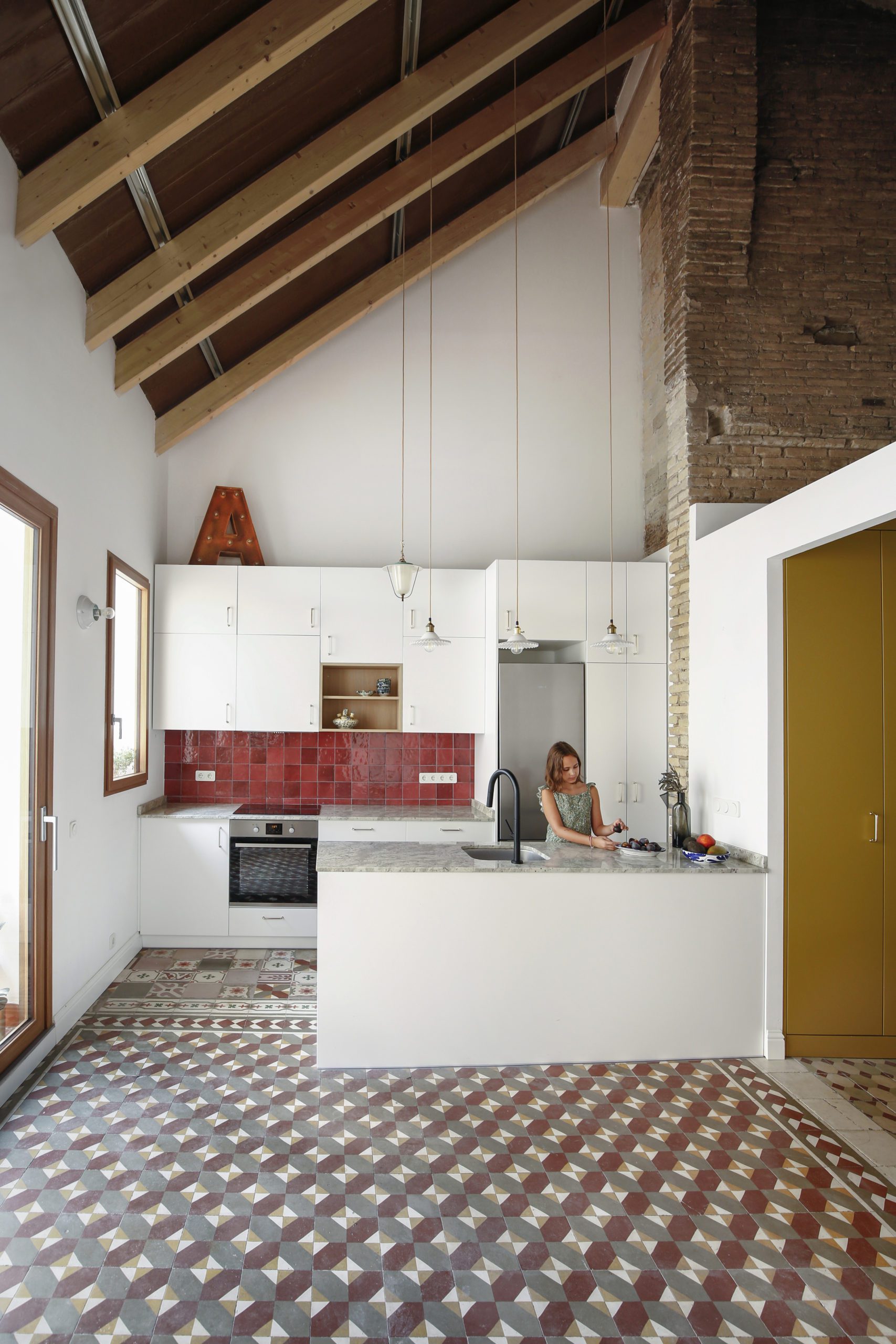 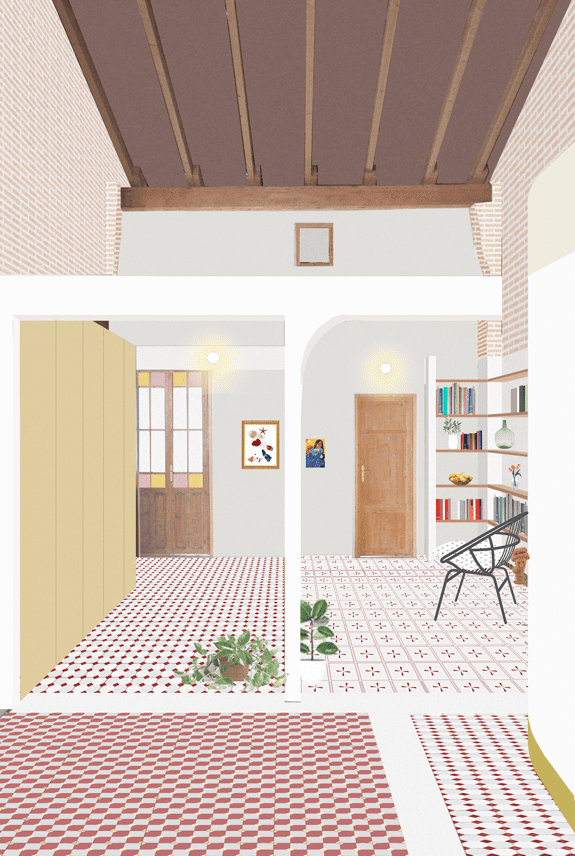 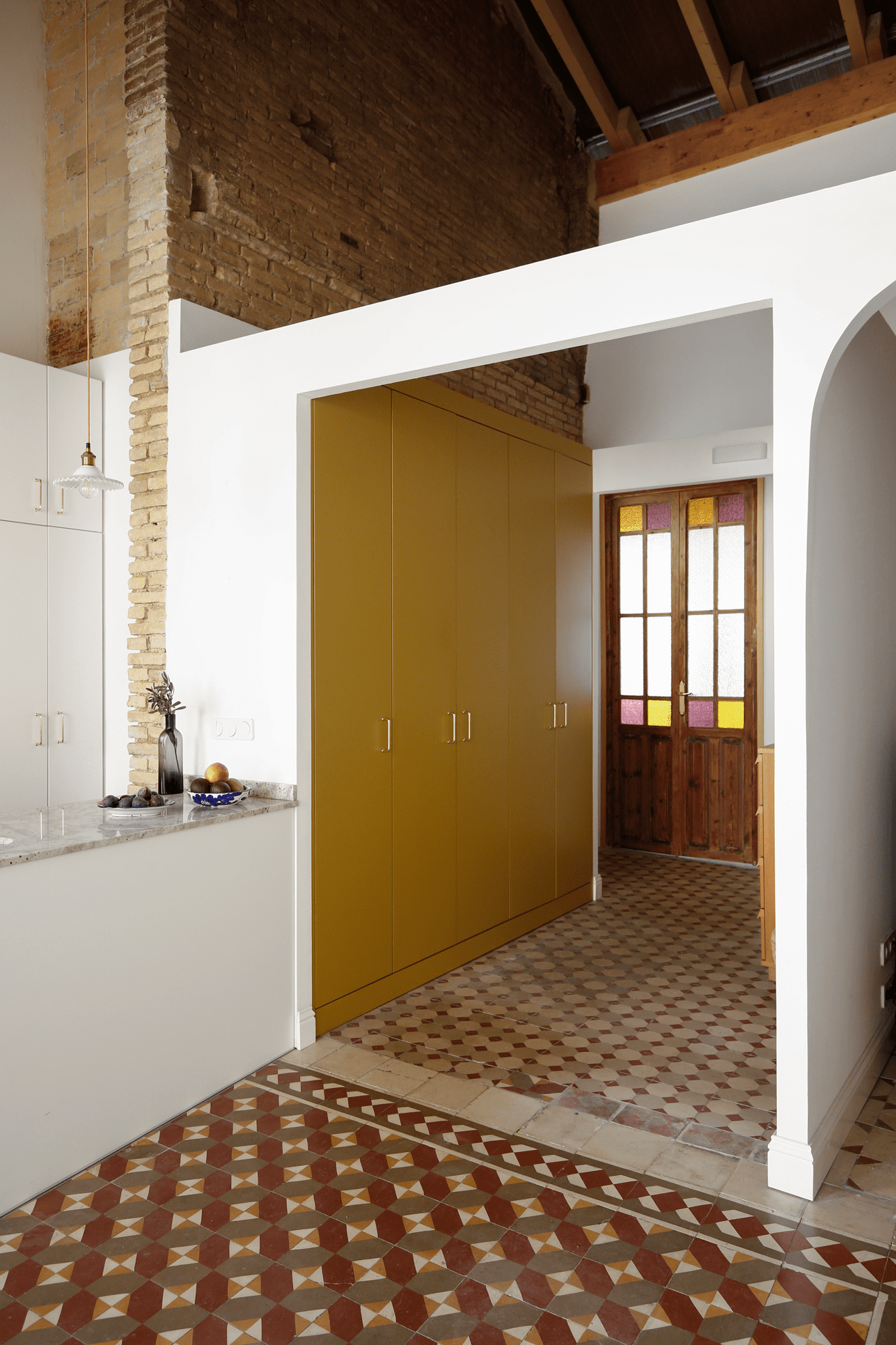 From the first visit, the space was envisioned in a very similar manner than what finally was built. The project for this family was located on the top floor of a building constructed in 1932. A previous remodel on the pitched roof had it left in view. The suspended ceiling was removed, but the original partitions walls were still in place, which, by not reaching the ceiling, the house was turned into a theatrical space, a film set with fragile partitions whose space had a falsehood sense.

The demolition of the partition walls shocked us but at the same time left us emotionless. The house with no compartmentalized rooms left at its highest point a height of 6.50 m, which made it lose its status as a house and turned the whole space into an immense room, but far from a domestic scale. Could we recognize a house in this space?

Ella and Pablo needs led us to propose a quick and inexpensive intervention. In the bedroom, they kept alive the idea of building a mezzanine, so the scope in this first phase had to be clear with the staircase location and its relationship with a space on a higher level.

At the same time, the works had to allow the way of looking to be redirected to highlight the origin. Highlight understood more than as a cleaning action, as a mechanism to focus virtues. The intervention had to reveal textures that made visible the traces and layers that time had left.

Therefore, we proposed a project that had a central piece formed by planes that did not reach the ceiling as its main element. We came up with a solution that would allow organizing and dividing the space, while becomes a linking element allowing it to be both surrounded and crossed. In other words: although it is a fluid space that can be traversed, at the same time it has a certain level of compartmentalization that organizes the space.

With the proposal, we were also able to return to the idea of ​​having a scenographic and artificial space, but with a domestic scale that the space needed as it was built up to a height of 2.70 m.

In short, our proposal is very simple: in the central space, through where is the access, there are 3 planes that delimit, order and host storage spaces at the same time. They form a more intimate and sheltered space. Facing the street, two bedrooms with open and generous space recover the original height; while facing the interior patio of the block and prior to the terrace, only a curved and sculptural box is built hosting the bathroom.

The powerful presence of the existing flooring in the house makes the rest of the elements accompany it but without conflicting, so that they find their place next to it. The walls are white and although they are very present they get dematerialized, which allows us to choose details that, subtly add color: the brass that acts as a baseboard in the bathroom piece, the faint strawberry color in the tiling of the kitchen or the vibrant presence of mustard color in the access cupboard.

When we made the photographic report and revisited the house almost a year after finished it, we realized that we achieved a reflection of the people who inhabit it. His books, his objects, his experiences and the art that covers the walls are elements that have helped to establish his use. Being inhabited is when the 2.70 m elevation has reached its reason for being.