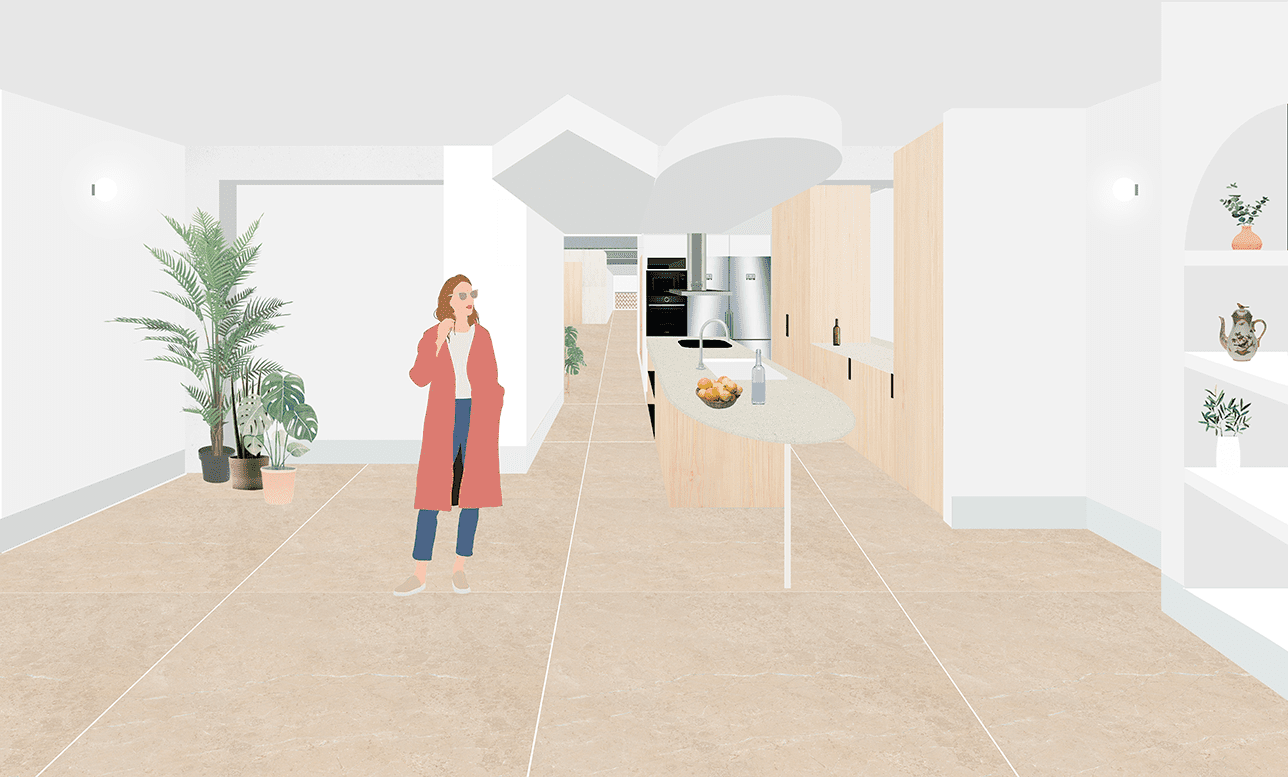 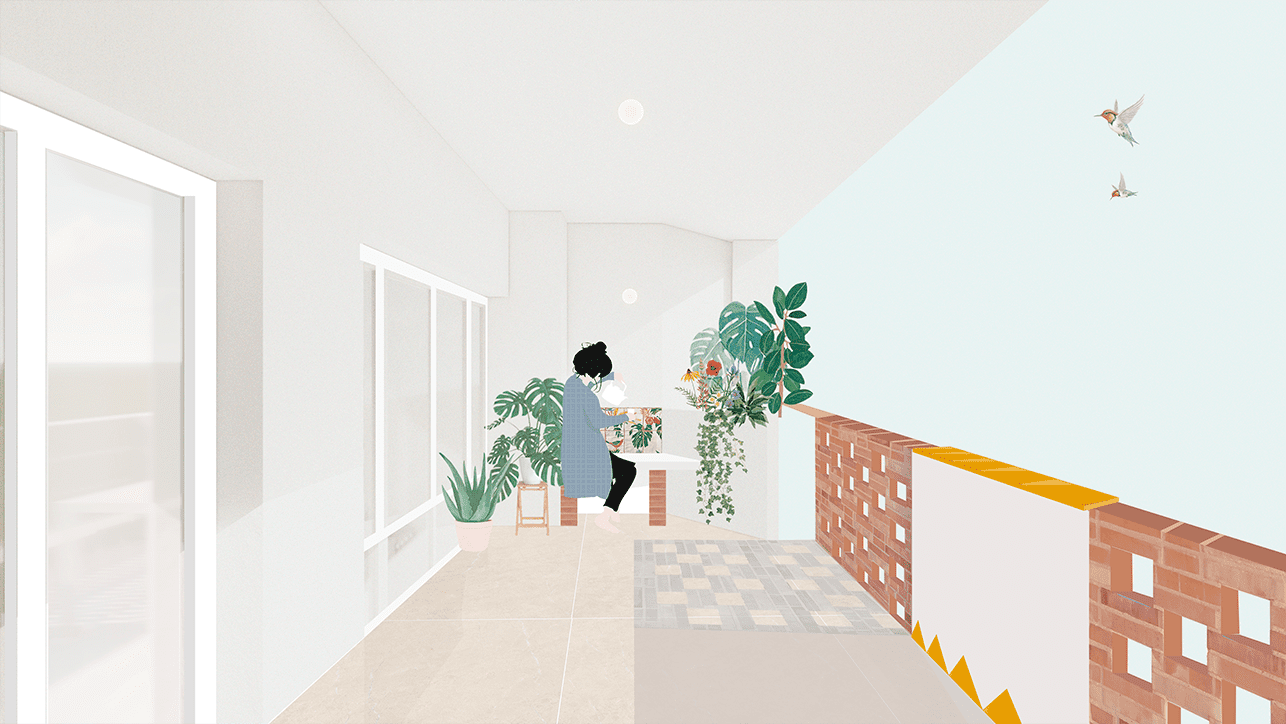 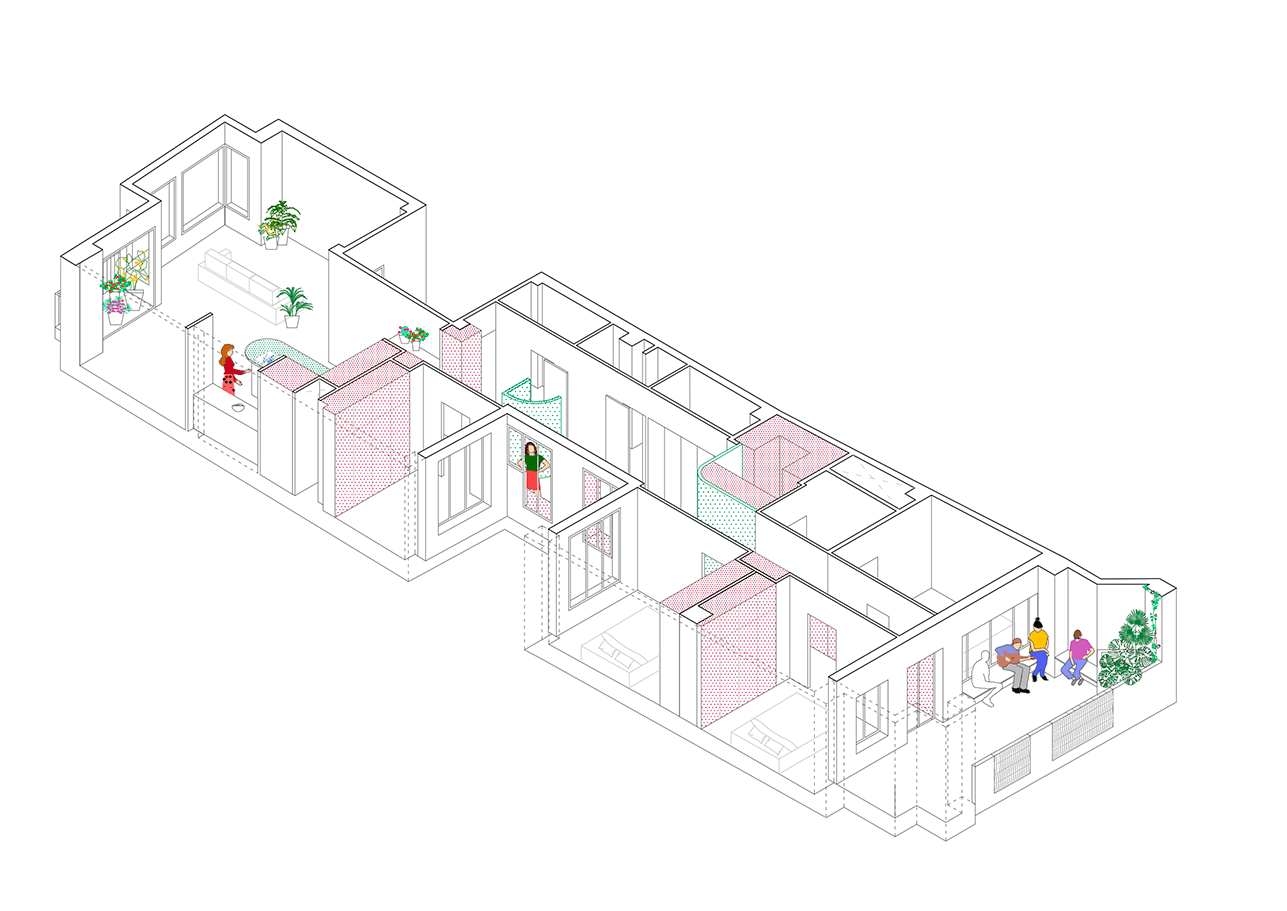 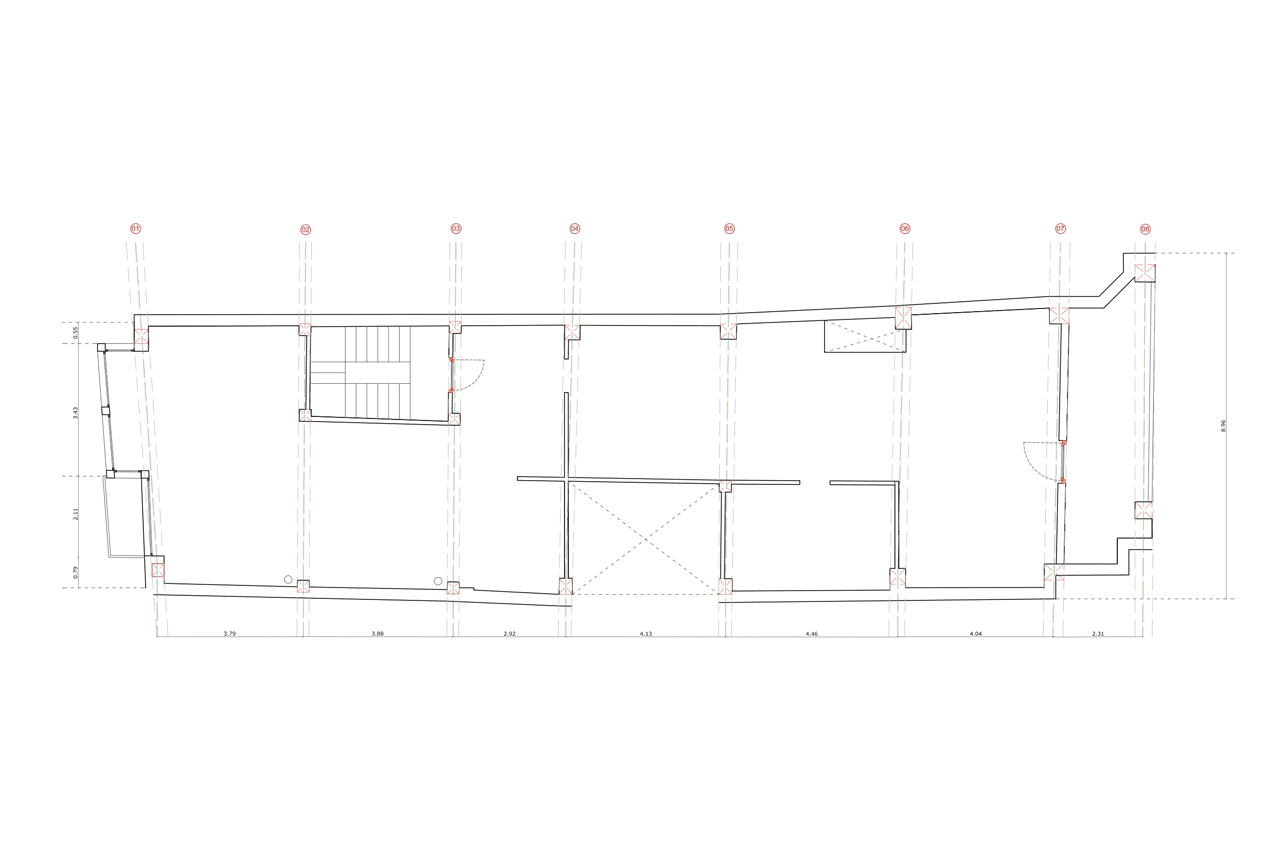 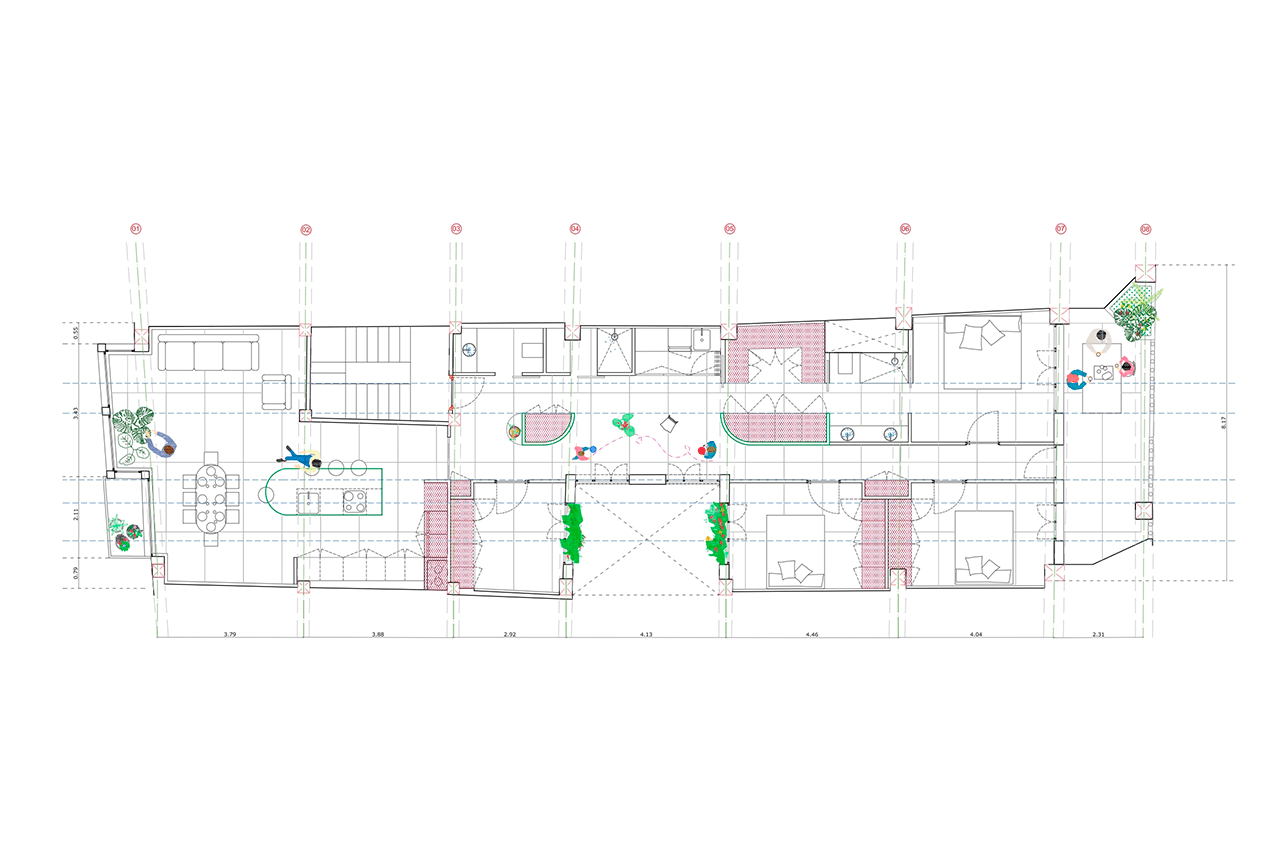 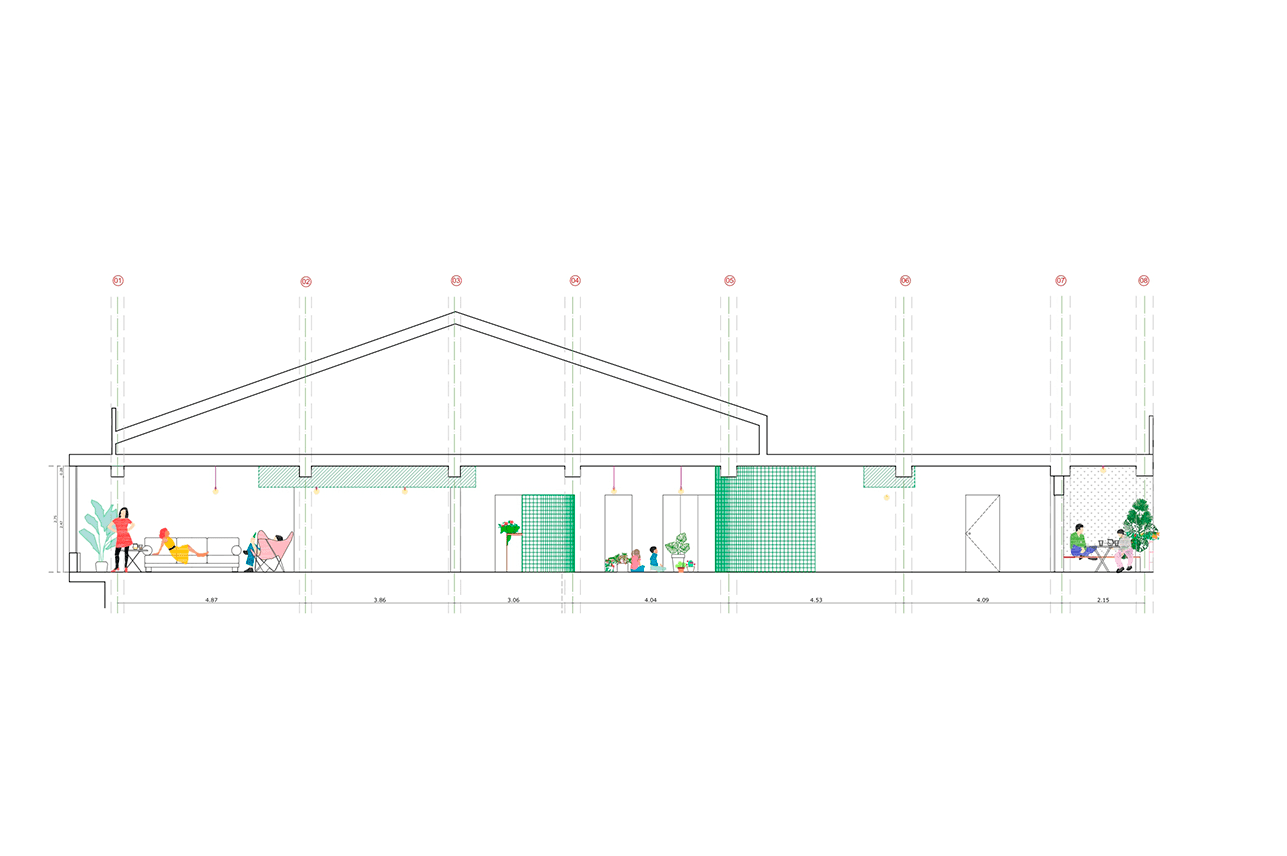 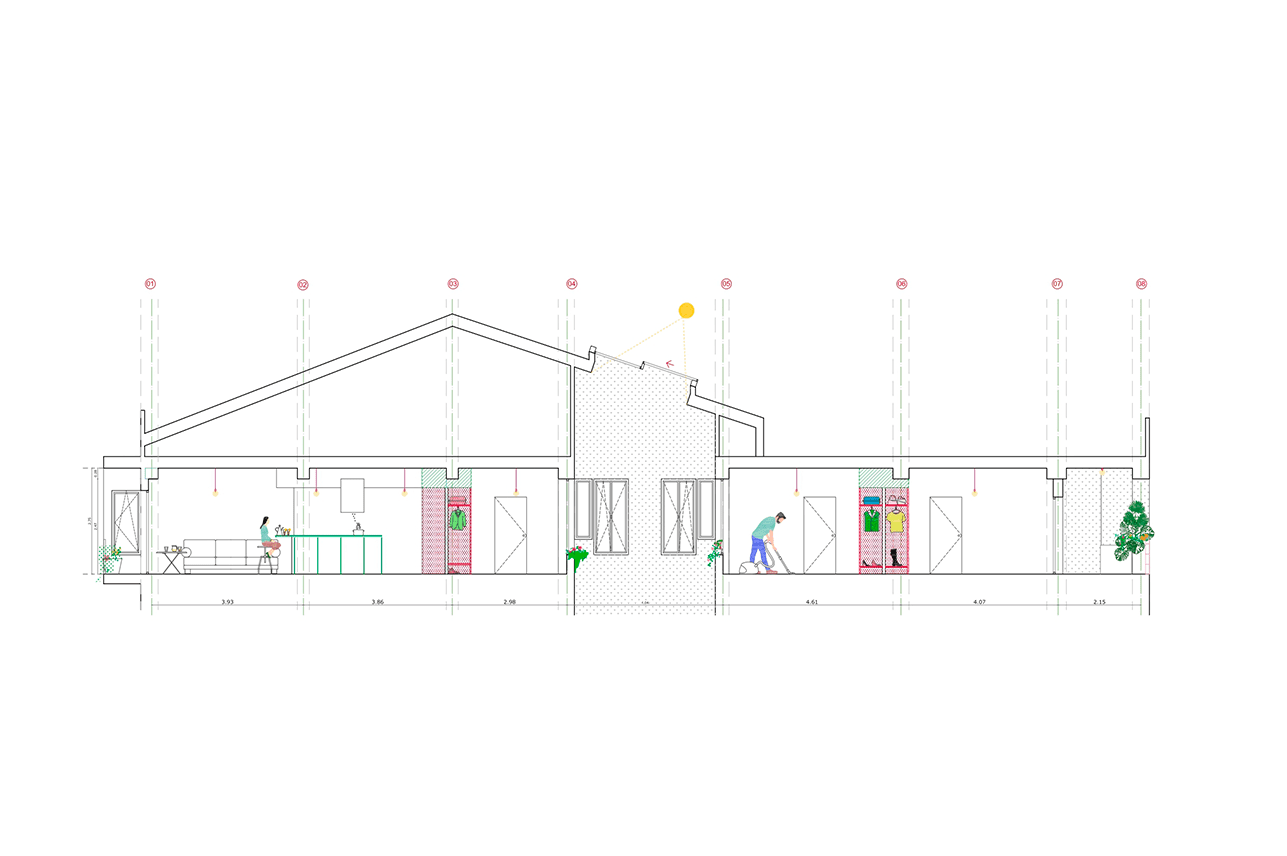 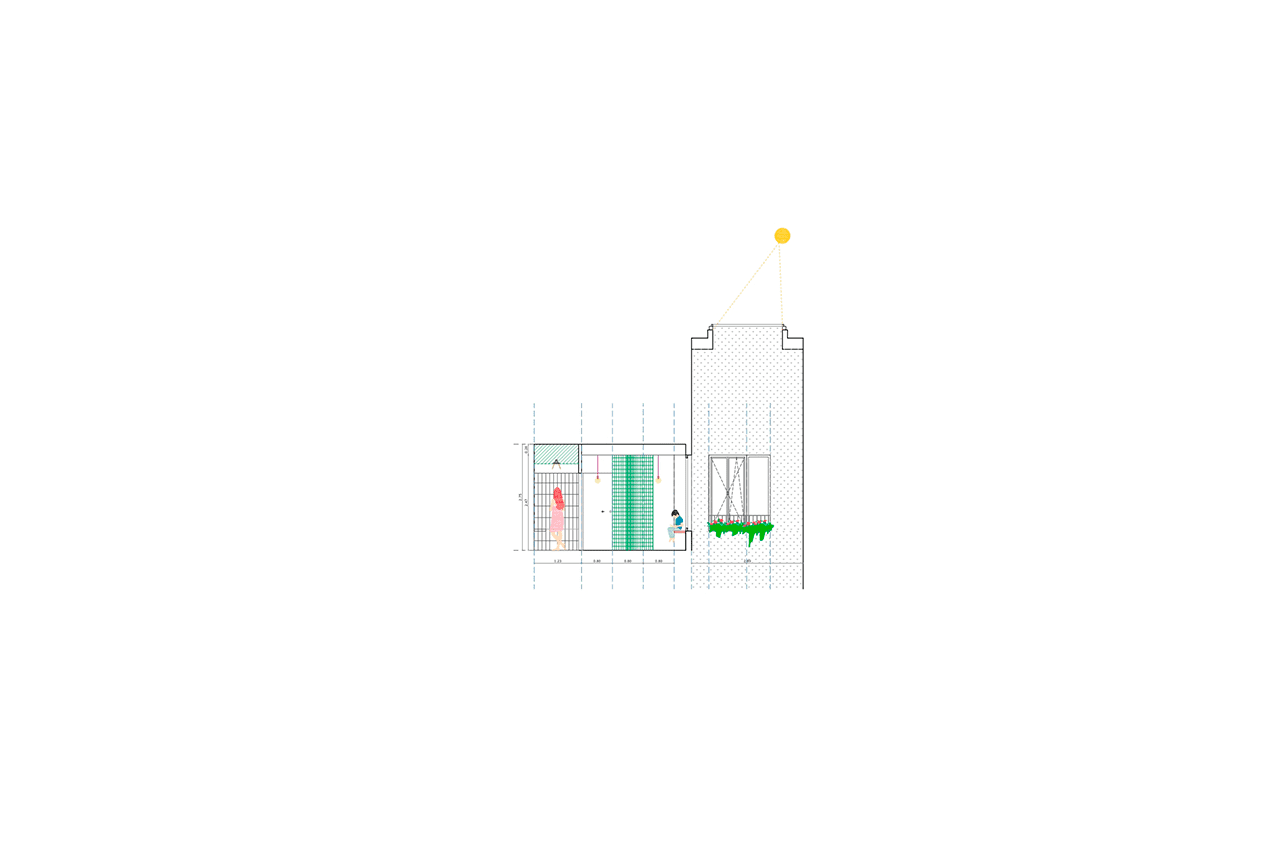 There is a custom in many villages of building a house thinking of the future of the family, as a “perfectible” construction, in which parents or grandparents leave a structural skeleton, an enclosure, hoping that their children or grandchildren will inhabit it in the future according to their needs. This is how we found this house on the second floor of a building in “Plaça Major” (main square) of Betxí, that had never been inhabited before.

When entering for the first time, we were surprised by its proportions, since it was very long, 25 m, with respect to the width, just 7 m. The fact of being a diaphanous and naked space at that moment made that feeling increase.

The house is a passer-by between two orientations: to the east its facade falls on the inside of the block, calm, with lots of vegetation and views towards a palace of the XV century, while to the west it falls on the Plaça Major, the busiest place of the town. There is a courtyard in the centre, but originally its three opaque facades prevented light from entering the house.

It was perhaps the possibility of having a closer relationship with the outside that made us redirect our look towards the courtyard, so far filled. Despite its apparent darkness and narrowness, it was the courtyard that caught our attention at the time of starting the project and of attending to the needs of the future inhabitants of the house. The possibility of giving light to the house from its central point became an opportunity from which the project strategy was to begin.

Mar and Andrés wanted a house for their present moment, but were also thinking of the possible changes of the family structure in the future. We thought that it would be nice to glimpse those changes around that courtyard for it to witness the transformations in uses and customs of the family life.

The design strategy began therefore as a serene approach to the space and the activity around it, to its strong presence in the house, which would grow precisely from there, the centre.

We also intended to draw a walk from Plaça Major to the palace, along which we would find different textures and spaces that gave us clues to know where to cook, where to enjoy a quiet reading, where to stop to take things stored in closets or where to have a cup of coffee outdoors, becoming a longitudinal journey of succession of moments and meetings.

Thus, the central spine which allows us to give life to the house along its entire length connects the busiest part of the house with the quietest, it joins each room of the house, which turn more or less discretely to it, and it solves ventilation and natural lighting cleanly and effectively.

The resulting materiality is neutral, homogeneous and harmonious, in soft and lighting tones, while the small details strategically incorporated along the spine will help us to know how the house works, and how to provide the necessary feature to strengthen the spatial idea.